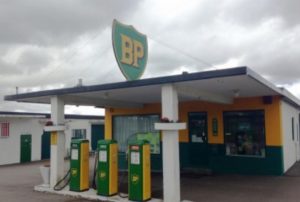 There are a multitude of roadside service stations. Some are really not service stations at all but just gas docks with a place to pay. Some also offer diesel, and some stations have convenience items – you know, snickers, fruit loops, beef jerky, velveeta – all the food groups. Other stations have service bays, many offering state emissions inspections, while others offer service with the luxury of a convenience store attached.

Full service stations usually charge the most for gas since inevitably people will stop and ask, “Do you know what this, cha-clung, knock-knock, burp-idge, gurgle-gurgle squeak is all about?” They’ll fill-up as they wait to hear what the car-doctor has to say. “Well, that’s your piston-head prodding the distributor cap to talk to the exhaust chamber about it’s belching, while nudging the radiator to knock-off with the steamy-leak that you think is gurgling.” To which the unsuspecting, uninformed, uneducated in the ways of technical college know-how, replies, “Oh-my,” and promptly screws the top back on the gas-tank, and drives off until a tow truck has to retrieve them. Or they come back when they’ve raided the piggy bank to make a small down-payment on the repairs which cost more than the book value of their means of transportation.

Then there was Tom’s BP station.

Tom’s station sat at the intersection of US Highway 64 West and Highway 281. This is the epicenter of the eastern slopes of the Blue Ridge mountains in North Carolina located between Cashiers and Brevard. It had a nice, albeit small, square roof over the gas pumps, and a pitched roofline with an inviting green awning out front – well at least a sliver of green showed from under its current white mantle due to the blizzard in progress resulting from the meteorological marriage of Wedge – a super-cooled artic air infiltration, Gulf – abundant Gulf of Mexico humidity spawning winter precipitation, and Spin – an upper-atmosphere cyclonic devil born in the Pacific northwest.

This meteorological trifecta created a white-out and extremely hazardous driving conditions as we floated along Whiteside Valley road in route to Brevard. We were following a stranger we’d met a few miles back who generously offered to help free us from Old Man Winter’s grip.

We prepared to turn left into Tom’s service station and convenience store behind our new-found savior, Sam Turner. A rental house sat to the right, parallel with Hwy 64, while the station sat at an angle visible to both roadways, making it the center of the mountainous road network of Whiteside Valley, and thus the center of this universe.

As I prepared to enter Tom’s, you could sense the fierce mountain surroundings. Their dusky outline was forever imprinted in a Kodak-moment on my brain, though due to the snow-filled atmosphere, the Blue Ridge’s massive profile was barely visible. One could still make out the translucent dance of light between the waves of snowflakes and the flood lights on Tom’s road-corner sign.  Twilight was being sucked into the black hole of the storm and nightfall.

We were desperate to escape the bone-chilling storm that was exhaling artic-sourced cold on us. I quickly followed Sam inside while my wife Ella and our two young boys headed for the restroom out back.

“Hey Sam Turner,” a man uttered from just behind the counter to our left as we fervently shook off the storm’s icy embrace. His voice was vaguely familiar, a gravelly well-rounded baritone with an effortless delivery, as if no exhaling was ever necessary when words left his mouth – sounded like Tom who Sam had called after I’d knocked on his door less than an hour ago.

Sam said, “Tom Bradley,” and that was all, no hello, no further banter, but plenty of communication passed from Sam to Tom in the manner of his tone – respectful and low on the reverberation meter. Thanks to familiarity and our mission already being known, no howdy or how are you’s were required. “This here David we talked about.  He’s the one we done figure needs a road plowed,” said Sam.

Elsewhere a few men were gathered at what appeared to be the lunch-counter, some pausing to contemplate what Sam Turner had drug in, in light of the weather. Others continued to talk softly to avoid drowning out Tom, the proprietor.

The surroundings were classic. I expected the tidy rows of remote convenience store staples, one filled with toilet paper, ex-lax, BC headache powders, Tums, and a lonely last bottle of Pepto-Bismol. The next was full of pork rinds, Wise potato chips, Chicken-In-a-Biscuit crackers, Vienna sausages, Twinkies – essentially every healthy low-cal item you could consume.

But that is where the similarities to all those scattered, sparsely stocked rural stations ended. Tom’s was not about nutrition, household staples, or gasoline. Tom’s store was a welcome-mat to both the network of Whiteside Valley natives as well as wayward souls who stumbled upon this cultural window to the local hamlet. And though all the residential and resort-like finery of Lake Toxaway lay just over a hilltop north – comprised primarily of Atlanta’s second-home southern gentry – Tom’s was dominated by its own distinct aura, emanating from the local’s environment and married to the history of this erstwhile remote mountain outpost.

A sampling of the food offerings – local mountain-clover honey, country ham, pickled okra, Hoppin’-John, (for those who might think Hoppin’-John is a one-legged man, this southern staple is actually edible, made of an amalgamation of black-eyed peas, onions, green peppers, vinegar, rice and bacon), North Carolina vinegar-based barbeque, collard greens with plenty of fat-back, sweet tea, fresh-squeezed lemonade (did someone say Arnold Palmer?), unsliced bacon, whole pickles (complete with tongs to fish out these former cucumbers from a gallon jar), blackberry jam, boiled peanuts, dry roasted peanuts and Coca-Cola in the bottle (everyone knows dropping peanuts in your coke bottle frees you up to smoke or do whatever you want with your free hand), white bread (locals don’t clear the shelves during snow events in the mountains, so an inventory of this bread fully bleached of all nutrients was still available), individual pecan pies (comprised of 80% molasses, 18% pastry shell, 2% crushed pecans), and everyone’s favorite – Goo Goo Clusters (you’ll just have to find out for yourself what this concoction is all about, as a description would risk an R-restricted rating at the movies).

The experience – priceless, as Tom’s panoply of goodies set a tone as comforting as Sam Turner’s living room, located a handful of miles south.

Interior florescent lighting fused with the soft glow of neon hung in the windows advertising RC Cola and Winston Salem Cigarettes. This merger of lights illuminated a wisp of pork-scent smoke hanging just above our heads, the thin haze a friendly, yet ghostly ruby-red hue. The glint off the stark white metal merchandise rows was softened by this meandering trail and warmed customer’s faces. Randomly bunched inventory was haphazard, leaving shelf-space either vacant or overstocked. The wooly-attired, overall-clad patrons were milling about, some smiling and gesturing hello with a nod of the head as they focused on their shopping.

Altogether the store exuded simplicity and the balm of unpretentiousness. Mix these ingredients with conversation and you have life. Tom’s managed all this effortlessly and thus had life abundantly.

Given we’d just come through an adrenalin draining drive of terror to reach Tom’s, I was puzzled as to how the locals seemed unfazed as they talked, gathered and ate, unconcerned with road conditions. No one even mentioned the white outdoor transformation. But then it occurred to me, every truck parked outside was just that, a truck. Nothing but trucks were visible except for a souped-up sedan parked on the side.  And as any southerner knows, trucks have a four-wheel drive pedigree around these parts, just as clearly as an old plow is mated to a mule.

To these stout southern-bred mountaineers, the blizzard continuing unabated just beyond Tom’s welcome mat would become a springtime footnote. The snow melt would contribute to perfectly chilled gurgling streams, ideal for trout, the run-off filtered through the aquifers of jumbled and rounded mossy rocks. Just outside Tom’s, the melt would carry nutrients in its runoff, cascading forever downward through the countless mountainsides, ravines and gorges of Whiteside Valley. This giant aquifer nourished the nymphs and their mayfly frenzied spring-hatch. The hatch in turn would feed the trout, fueling the existence of the fly fisherman, stoking the imagination of anyone who dared fish the swift-gurgling waters. In short, Tom’s offered both an ideal shelter and sustenance a few steps from heaven.