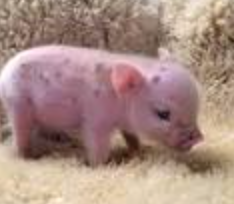 All ten Amateur Campers continued our convoy north on I-575 which became Highway 5, aka the Georgia Mountain Parkway. Jasper Jeep, the highest volume Jeep dealer in Georgia, came into view just as the mountains jumped in elevation. Springer Mountain and the Bent Tree ridge were perched above Jasper, a picture postcard town that begged for four-wheel drive adventure.  The miles clicked by as we drove on toward Elijay, elevation gains presenting long views of the Piedmont below us.

The deep mountain majesty of the Blue Ridge wasn’t yet visible, though its mystique pulled us inexorably closer to those self-sufficient, fiercely proud, geographically isolated southern Appalachian descendants.  Our little band, feeling as though we were leaving our troubles behind, were unaware of our incursion into a culturally troubled region framed by intense beauty.

While I was engrossed in peering at the horizon, Ella practically shouted, “next exit right to the Pink Pig,” and just in time.  We all exited east of the expressway, then were drawn by a bright spotlight focused on all those wooden pink pigs we’d heard about. Set into a steep slope in back of a ramshackle tin-roof building sat the overly illuminated 2-dimensional wooden pigs. No Miss Piggies with a fancy hairdo, just dozens of bald Porky Pig look-alikes – the massive piggy family all pointed downhill into the back of the restaurant.  Piggy hillside advertising seemed to do the trick as the parking lot was packed.  After locating an adjacent field to park, we carefully navigated some slick asphalt to enter.

A few how-ya doin’ nods from happy, toothpick toting patrons greeted us in the breezeway as we entered. “Let’s push those two tables together,” said Chip, who supervised matching up table corners and evenly distributing the red and white plastic table-cloths. Chairs slid easily on the greasy floor as we plunked down. Elbows on the table, our bodies leaned in, eagerly anticipating our last evening meal prepared by other hands before consuming camping cuisine the next two days.  Orders for sweet tea, slaw on chopped pork served on white buns rang out. “Bring us five French fry baskets,” said Howard, the least affected by greasy indulgence, given his lanky frame.  What the hell, I thought, bring it on, even the Brunswick stew for surely we’d hike it off.  Knowing our packs would be personally backpacked in, knowing the approach trail was nearly five miles, understanding we’d have to fiord creeks to reach our campsite, chowing down was our focus.

Our stumpy red-headed waitress seemed to be taking a personal moment, right as our appetites were peaking.  “Meg, my belly showing?” our plump server asked.  “Gee Grace, you look bout’ same to me as a few weeks ago,” said Meg, “but just a mite more glow I’d say.”  That put a smile on Grace’s rosy cheeks. She then scooped up the baskets of fries and waddled quickly by to drop them at our table. “Thank you Grace” I said. Oily hot fries with ketchup liberally applied were scarfed by the guys, picked at by the girls. And no wonder, the ladies know health-hazard signs when they see them – starting with the greasy skid plate look to the asphalt.  The sheen was aided by a floodlight’s glow reflecting off the 10’ by 20’ Porky Pig lookalike billboard over the front door – not to mention the caked vent hood lacking its stainless steel glow, and silverware lacking even a glint.

Prior to our pork fest, a few customers caught our eye. “Y’all, did you see that man who must be waiting on a take-out order?” asked Sarah. One glance toward check-out raised at least one eyebrow apiece.  A Matlock-like blue and white striped suit, thick slicked-back strawberry hair, horn-rimmed glasses, polished penny loafers and a snappy paisley green and blue bowtie – a complete 360 from the rest of the overstuffed, t-shirt and shorts male patrons. Fact is, all the men, except the exceptionally well-dressed searsucker suit gentleman, wore high-brow visor mesh caps advertising every American made truck, auto parts or motorcycle manufacturer in the country – each cap worn so snuggly it created a forehead callous, visible whenever a man tipped their cap to female passers-by.

“Who is that?” I asked Grace. She was loaded down with humongous pork sandwich plates she plopped in front of us and then answered, “Oh that’s Elijay’s Mayor-elect, Jeb Royston. He still on the campaign trail. Afraid there could be a re-count any day now.” “Really?” I said.  Grace quickly added, “yep, most locals thinkin’ his wardrobe was a unreturned campaign slush fund, put ‘ta personal use, Brylcream and all.” My ears perked up when the Mayor-elect shook hands as vigorously as if working a dry water-pump with a big burly man, one Herbert McIntosh. Mr. McIntosh was indeed the McIntosh family of apple orchard fame, according to our informative waitress. “Couldn’t done it without your support Bert,” said Jeb. “Pleasure Jeb, now about those cider-permits…” Mr. McIntosh asked.

Politics aside, Pink Pig got an overall C+ rating from our band of 10 (we’d become accustomed to passing out restaurant grades). Scott, Chip and I graded roadside dives on the curve, less-scrutinized than Atlanta’s chef-driven restaurant scene where everything counts. Instead we were in it for the Anthony Bourdain experience – less about ratings, more about the culinary experience, atmosphere and the mating of food with the surrounding community. John was simply a volume-eater, stating “hey isn’t this Q great!” when the rest of us were underwhelmed by our slaw on pork sandwiches.  And Howard, well, he had his hands full trying to keep Kathy from making rude faces about what a dive we were in.

Our report card you ask?

First, the Pork – greasy bits with some smoky pinkness, skin crisped & mixed in a bit much when tender pork should be the focus, not mini-pork rind chips. Pork rind bits seemed to be thrown in as an attempt to help a sandwich with slaw be less soggy. Bottom line – toast the buns longer and add less rind to move up our estimable grade scale = C-

Fries – well, you got a sense already, droopy, oily and less than firm, but since they’re served hot, heat and ketchup can cover a bunch of tater-prep imperfections. Biggest concern, don’t look at the fryers too closely or you may never come back again = C

Stew – local corn overcame the frozen limas, canned diced tomatoes with a hot-mustardy spice-kick – just too watery as most stews are…C+ this time.

Attitude – this catch-all for patrons, staff, décor and mating to the local flora, fauna, culture – you know, what’s the restaurant’s relationship to it’s surroundings, does it make a lasting impression.  No suspense here as everything is out in the open to see – and no denying a step up and drum roll = B +

Finally an uptick in our grading on the most important measurement – Attitude.  I mean how could anyone listen to country twang, eat tangy Q, rub elbows with local gentry, watch babies belch, mommys chuckle and men talk hunting and politics, all in an over-the-top immersion of pig pics everywhere.

A sampling of artwork and photos – Arnold the Pig from Green Acres, Porky Pig, Pig Troughs, Pigs in Blankets – truly, Pigs in slop – unruly, clean little pink baby pigs – too cutie, and of course a Pig in a Poke – no joke.

Overall – a worthy, held together by duct-tape bygone roadside 50’s era precursor of the drive-in with very average BBQ… still an unforgettable experience, one you’ll get a hunkerin to revisit, if only to see those hundreds of hillside Piggies again that permeate the mind.